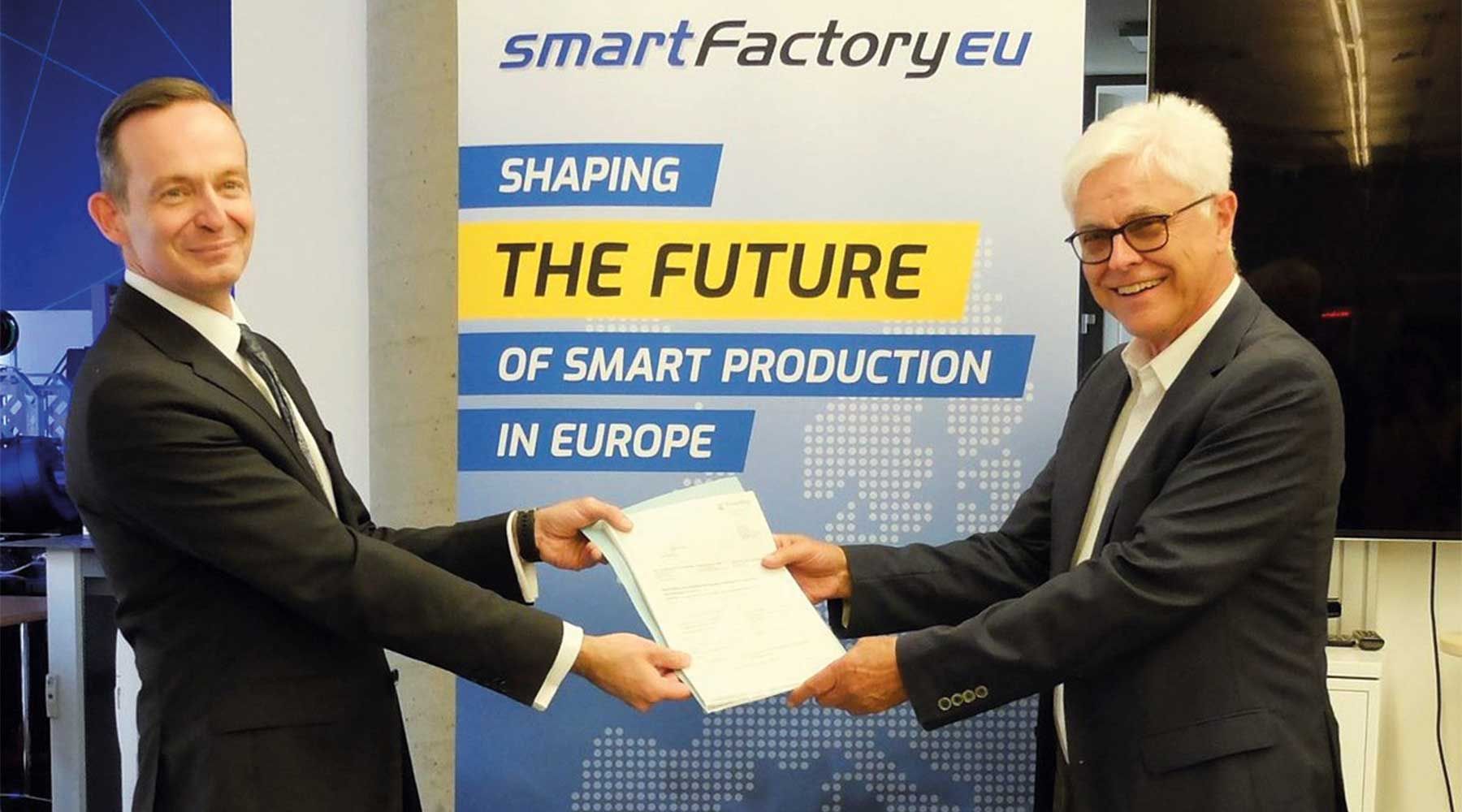 The German federal state of Rhineland-Palatinate is supporting the establishment of the new European research umbrella organization SmartFactoryEU, based in Kaiserslautern, with almost 200,000 Euros. Minister of Economic Affairs Dr. Volker Wissing handed over the funding notification to Prof. Dr. Dr. h.c. Detlef Zuehlke, founder and former CEO of SmartFactory Kaiserslautern.

Zuehlke pointed out that SmartFactory-KL kicked-off a trend 15 years ago. In the past few years, comparable centers have been established in Europe, each of which has been driving its developments forward on a national level. “However, the world of production is a big global network. Europe will only be able to stand strong against Asia and America in this economically important field if activities in Europe are also connected in a stronger network. This is the task that the new SmartFactoryEU umbrella association strives to accomplish,” said Zuehlke, Managing Director of the new association.

The founding members of the umbrella association are Flanders Make (Belgium), Brainport Industries (the Netherlands) and SmartFactory-KL (Germany). The task of the new association is to establish a European network of operators of R&D centers for smart production technologies and to initiate joint research projects. For example, the initiative has already held initial talks with the German Federal Ministry of Economics and Technology to accompany the GAIA-X project at European level, which aims to develop secure data exchange on an open European data platform with standardized services. The numerous activities in Kaiserslautern will benefit small and medium-sized enterprises in Rhineland-Palatinate, which will have access to the latest developments in smart technologies through SmartFactory.

SmartFactoryEU was founded in 2019 and sees itself as an umbrella organization of the national R&D centers around smart manufacturing and industry 4.0 in Europe. The organization, which is currently being set up, has set itself the goal of establishing a Europe-wide network of these centers and coordinating joint activities such as research projects. Managing director is Prof. Dr. Dr. h.c. Detlef Zuehlke. SmartFactoryEU has the legal form of a European Economic Interest Grouping (EEIG). The state funding is a start-up financing over three years.

This press release was issued in German by the Ministry of Economic Affairs of Rhineland-Palatinate on September 23, 2020. The original can be found here.